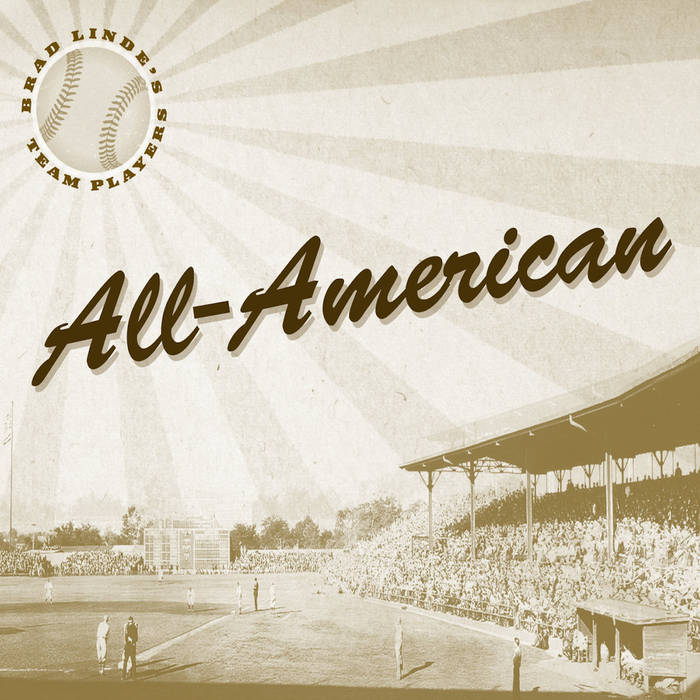 
"All-American" is the follow-up to our 2014 release "Draft". The debut album was loosely inspired by football, 12-tone music, free jazz, folk music, and wit. This collection celebrates things as American as apple pie: jazz, baseball, freedom, and trains.

Not only to feed the humor that created this band, but to right a wrong, we included British electric bassist John J. Williamson in our baseball themed songbook. John participated in our first performance at Twins Jazz in Washington DC in April 2014, before being let go for playing electric bass.

In addition to our originals, we have included our usual standard associated with Thelonious Monk and two compositions by saxophonist Albert Ayler. Ayler's melodies have a certain folk feeling and capture the spirit of Americana. We added "Ghosts" to our repertoire on Ayler's birthday in 2014 at the beginning of our cross-country tour. Deric adds his gently driving "train beat" underneath the floating theme. "Angels" comes in after my graphic score to "Outfield". The musicians move through key centers as if running plays in a baseball game, ending with Ayler's melody.

"On Ivy..." is a four part work that is heavily influenced by the 12 tone improvisational approach of New York City alto saxophonist, John O'Gallagher. Each movement features a different member of the ensemble with formal and rhythmic attributes being derived from the syllabic content of the piece's title.

And what baseball experience is complete without the sounds of a Hammond B3 organ? On the collectively improvised pieces I play the "beast" and provide some accompaniment and solo on my piece "Swing Batter Batter, Swing!". "Louisville Slugger" is a solo piece from a graphic score and an homage to my birthplace.

This album, with its baseball theme and wealth of uninterrupted melodies, is dedicated to my mentor and hero, Lee Konitz. Over the last 8 years I have watched many Yankees games at his apartment, probably the most I have ever been involved with the sport.

Thanks goes to Mike at the Brink, Billy, Aaron, John, and Deric, Nathalie "Natty Bo" Sado Nisinson, and Matt Rippetoe.

Recorded at The Brink in Centerville, VA
February 13, 2016
Engineered, Mixed and Mastered by Mike Reina
Artwork and Design by Matt Rippetoe at Sideman Creative
www.sidemancreative.com
Produced by Brad Linde